David Axe has got an interesting piece up at DR on the incoming Supreme Allied Commander Europe (SACEUR), US Navy Admiral James Stavridis. Axe makes some interesting points about the relevance of Stavridis’ narco-busting experience in South America, but what struck me was how details about his and General Stanley McChrystal’s respective roles have gotten garbled.

Navy Adm. James Stavridis, arguably the sea service’s intellectual leader, is making the leap from Latin America’s U.S. Southern Command, to the top job at European Command. That means he’ll also be NATO Supreme Commander, which puts him at the head of the faltering NATO war effort in Afghanistan.

Stavridis, in a media interview:

My experience there will translate well to my role as the NATO commander in Afghanistan, which is, let’s face it, an insurgency, drug-fueled, obviously 100 percent different in many ways. But, my experiences in understanding and learning counter-insurgency I think are up to the task.

Based on his experience in Colombia, Stavridis praised the elevation of commando Gen. Stan McChrystal, to lead U.S. forces in Afghanistan. “I think he’s a perfect choice. He has deep, deep tactical experience in insurgency.”

Sigh… Stavridis is Supreme Allied Commander Europe, a.k.a. “SACEUR” (pronounced SACK-UR). That makes him el supremo of Allied Command Operations (ACO), which is one of two NATO strategic commands (the other being Allied Command Transformation, or ACT). The position places Stavridis in charge of a number of European headquarters, as well as all NATO operations. What it doesn’t do is make him “NATO Supreme Commander”. There’s this little position called Secretary General (or SecGen), see, and SecGen and SACEUR have equivalent authority. The former directs the civilian-diplomatic part of the Alliance, the latter runs the military strategic side of things.

Stavridis’ job as SACEUR also doesn’t make him the guy running the show in Afghanistan, at least not directly. There’s an intermediate operational headquarters between SACEUR and ISAF, for one thing. McChrystal is Commander ISAF (COMISAF). That means he’s doing more than just leading US forces in Afghanistan, he’s also running the NATO mission there, including troops from more than forty contributor nations. He reports to Stavridis, but he’s the one directly responsible for the show in Afghanistan.

A lot of this can be put down to the byzantine nature of NATO structures. Some of it can probably be explained away as new guy slip of the tongue. But at the end of the day, it’ll be interesting to see how the ego pokes turf wars campaign plays out. 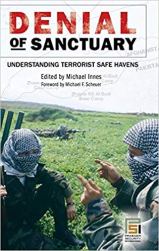